Yet another great brownie recipe

Preheat oven to 350F. Cut a piece of parchment paper (NOT wax) on the bottom of a 9-13" pan (use straight edged aluminum or glass, not those nonstick ones which will burn the brownies). 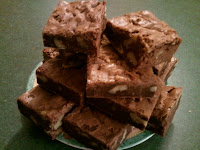 Melt butter on stove top or microwave. Once melted, remove from heat and add chopped chocolate. Let it rest off the heat until the chocolate is melted, around 10 minutes. If it doesn't melt, heat on low or microwave at 50% power until it does watching VERY carefully NOT to overcook or the chocolate will burn! Add sugar and vanilla and mix with spatula until blended. Whisk/mix in 4 eggs until thoroughly combined.

Bake in preheated oven for 30 minutes.

Let cool. To cut, chill in refrigerator overnight or freeze and they will be easier to cut.

Posted by Pumped Up Foodie at 10:28 PM No comments:

Email ThisBlogThis!Share to TwitterShare to FacebookShare to Pinterest
Labels: chocolate

Ingredients
1/4 dark rum (3 star Ron del Barrilito is a great choice)
1/2 cup simple syrup (recipe follows)
1 8" chocolate genoise cake (recipe follows)
1 recipe chestnut buttercream (
recipe follows)
1 recipe chocolate glaze (
recipe follows
)
Simple Syrup
1 cup sugar
1/2 cup water
pinch cream of tartar
Mix in saucepan, bring to a simmer, then cover and simmer for 2 minutes. Remove from heat and let cool.
Chocolate Genoise Cake
4 tablespoon melted unsalted butter
1 teaspoon vanilla extract (real)
1/2 cup (2 oz) sifted cake flour
1/3 cup ( 1.5 oz) unsweetened cocoa powder (I use Ghirardelli's)
4 eggs
2/3 cups sugar
Preheat oven to 350F.
Butter and flour an 8-9" straight edged (2" height) cake pan and line with parchment paper (NOT wax paper).
Mix vanilla and butter and keep hot.
Sift flour and cocoa powder together and set aside.
Heat eggs and sugar in a large mixing bowl over a water bath whisking constantly with a hand-held whisk until eggs are hot to the touch and the sugar dissolves into the egg. Be careful NOT to cook/scramble the eggs! Immediate transfer the eggs to a mixer and beat at medium=-high speed until eggs double to triple in volume and are cool/room temperature (10 minutes?).
Fold flour mixture into eggs using a large spatula.
Fold hot butter mix.
Bake on prepared pan for ~25 minutes.
Chestnut Buttercream
1/2 cup sugar
1/4 cup water
2 pinches cream of tartar
1 large egg
6 oz unsalted butter, room temperature.
1/2 canned sweetened chestnut puree
Cook sugar, water and cream of tartar in saucepan until temperature reaches 242F. Meanwhile, in mixer, beat eggs at medium speed until frothy. When syrup reaches temperature, poor onto eggs while mixer is on. Make sure you poor through the side so you don't hit the beaters to avoid splashing. Continue mixing until the egg mixture has cooled to room temperature and doubled in volume. Add butter in 1-tablespoon lumps while mixing until incorporated and the buttercream looks smooth and spreadable. Mix the chestnut puree.
Chocolate Glaze
Prepare AFTER the cake is assembled and is chilling.
8 oz bittersweet chocolate
6 oz unsalted butter
1 tablespoon corn syrup
Melt on microwave (50% power) 1-3 minutes (one minute batches). Be careful NOT to burn it. Cool until temperature reaches 88-90F.
Assembly
Slice cake horizontally into 3 layers.
Mix simple syrup and rum together.
Place top layer upside down and brush with syrup. Spread 1/2 cup of chestnut buttercream. Brush second layer with syrup and then place, moist side down, on top of the buttercream of the first layer. Bursh dry side with more syrup. Repeat with last layer until you have three moist layers of cake with 2 buttercream layer in between. Make sure the layers are symmetrical and even.
Spread remaining buttercream smoothly over the top and sides of teh cake. Don't worry about crumbs sicne you are going to glaze the cake.
Chill the cake for AT LEAST 1 hour before glazing.
Prepare glaze and glaze cake by slowly and evenly pouring and carefully spreading glaze on top and sides. See the following video for glazing cakes. It is difficult but practice makes perfect:
http://www.youtube.com/watch?v=UNEScRQePDA
Credit: Alice Medrich
Posted by Pumped Up Foodie at 11:04 AM No comments: