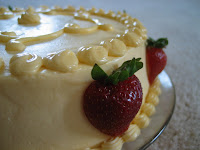 This cake has four basic recipes: the cake, simple syrup, filling and frosting. The recipe uses a European sponge cake called Genoise, which, unlike American sponge cake, contains less sugar and the addition of butter, which gives the cake a crumblier grain for better texture and more moisture. It is also extremely versatile for a light cake as it lends itself to be sliced or cut into shapes without falling apart. The simple syrup, an important ingredient for moistening sponge cakes, adds moisture and sweetness to the cake. The addition of rum and lime to the syrup introduces Daiquiri-like flavors. The filling is a bavarian cream (a cream that uses gelatin for thickening and stabilization) whose flavor, in this case, happens to be strawberry. Finally, the frosting is buttercream made with REAL butter, eggs and sugar. All these put together become a sweet, moist and delicate cake with flavors reminiscent of that famous strawberry daiquiri cocktail.


Once you read this recipe you might think this cake is difficult to make. It really isn't if you follow these four rules of baking:
The recipes for this cake are adapted and/or inspired from many sources. Two standout as my favorites: Alice Medrich's Cocolat (a personal favorite) and Rose Levy's The Cake Bible (a must have just for its arsenal of "building block" recipes and the detailed, scientific explanations behind each).

If you have a Kitchen Aid mixer, this cake will be a breeze to make. If not, you are on your own ;).

To clarify, heat butter at low heat. Once melted the butter will separate. There will be yellowy foam on top and some milk solids on bottom. Skim off foam and then, with a tablespoon, transfer as much of the oil as you can to a small bowl (this oil IS the clarified butter), leaving the solid on the bottom. Discard the solids. This will yield approximately 6 tablespoons of clarified butter.

Using the mixer's whisk with your hand, combine the eggs and the sugar. Heat over a water bath at low heat, whisking constantly to prevent the eggs from cooking (you don't want scramble eggs here!). You want to get the eggs and sugar really warm to the touch. They will start to foam (that's when you know it's hot enough). If you are lazy, you can do this over the stove directly (skipping the water bath) but if you've never done this I don't recommend it. Once warm, transfer to mixer and mix on high speed until the eggs triple in volume, are very light and are cool. This will take time, 5-10 minutes of mixing, at least.

2 cups triple sifted cake flour (I use Softasilk brand, the only available at our supermarkets)

With a large rubber spatula, fold about 1/3 of the flour into the egg. The key here is to not leave flour clumps but also doing quick and gently to prevent the egg from collapsing. Remember that the egg is the only leaving agent in this cake. If it drops you are hosed. Repeat until all flour is folded into the egg.

Finally, take the warmed butter/vanilla extract and fold into the flour/egg mixture.

Divide into both prepared pans and bake in preheated oven (remember that preheated instruction!) for 25 minutes, or until the tops are nicely light golden color and slightly raised.

Let cool on racks. Once cool you can remove them from the pan by sliding a knife around the edges (to separate them from the pan) and reverting onto a plate or rack. Peel off the parchment paper from the bottom of the cake which will actually become the top of the cake. Yes, you have two cakes. One will be the top. The other cake you will only use half of it for the middle layer of the cake once you assemble it.

The cakes can be wrapped in plastic and stored in the refrigerator.

Combine all ingredients except the rum in a saucepan. Bring to a boil at high heat. Cover and boil for 2 minutes. Remove from heat. Add rum, cover and let cool. This yields about 2 cups of syrup. You will only need 1 1/2 cups.

You can store this in a sealed container in the refrigerator. Make sure that the container is very clean and seals so that outside odors don't get into the syrup.
The Frosting

This is one of my most favorite frostings because it is very silky and sweet and can stay firm after piping as long as it isn't too hot. You won't find yucky powder sugar nor shortening on this puppy.

Combine eggs in your mixer bowl and, with the whisk attachment, mix at medium high speed until light and fluffy. Stop the mixer and leave the egg mixture there. You'll be puring syrup in it soon enough.

Combine sugar, water and tartar in a saucepan and heat on high heat until a candy thermometer registers 242 degrees F. This is crucial. You don't want it a few degrees lower/higher than that or it will ruin the recipe.
When the syrup is ready, start the mixer at medium speed and VERY CAREFULLY pour the syrup into the egg while the mixer is on. Make sure to pour through the side so that the whisk does not splatter the syrup all over the place. The mixing prevents the eggs from getting cooked by the syrup. Once done, mix until the egg doubles/triples in volume and is cool to the touch.
4 sticks of unsalted butter (1 lb) AT ROOM TEMPERATURE

Do NOT use salted butter. It will make a very salty nasty frosting, trust me! I did that by mistake once. As I said before I use Land O'Lakes Unsalted butter because I have found it to be the sweetest, grassiest and creamiest of all. DO NOT, I repeat, DO NOT use Price Chopper's brand. It is the most oily and has a nasty, rancid taste. I don't have anything against them (I shop there all the time), but their butter just plain sucks.

When the syrup is cool, lower the mixer slightly and add the butter, one tablespoon at a time, mixing well after each, until all of the butter is incorporated into the syrup. If the mixture looks curdled, just keep mixing, it will all come together at the end.
Optional: 1 tablespoon vanilla or rum

While mixing, add this at the end to impart a slight flavor to the frosting.
The frosting can be stored in the refrigerator in a sealed bowl or a plastic zipper bag. Make sure to take it out and let warm to room temperature. You might have to rewhip it a little to bring it to spreading consistency.

You can make the strawberry puree in advance and store in the refrigerator. However, I recommend that the rest of the bavarian cream is done when you are ready to assemble the cake so that the gelatin sets after it is IN the cake.

To make an unsweetened strawberry puree:

1 20 oz bag frozen strawberries (yes, frozen). If you use fresh, make sure they are extremely sun ripened. Then freeze them (you'll need them frozen so that their cell membranes break down and their juices run out of them). Like I said, just stick to the bagged frozen ones.
2 teaspoons of lime juice

In a colander suspended over a deep bowl, let strawberries thaw. Once thawed, press them to extract as much juice from them as you can. You should have over a cup of juice. Transfer the berries to a food processor and the juice to a saucepan. Boil the juice until reduced to about 1/4-1/3 cup. Puree the strawberries in the food processor and add the reduced juice and the lime juice and process until incorporated. This should yield about 1 to 1 1/2 cups of puree.
Now for the rest of the bavarian cream:

Mix about 1/4 cup of strawberry puree w/ gelatin. Let sit for 5 minutes or so. Then microwave for a few seconds, stir, microwave, stir, etc. until the gelatin is complete incorporated into the puree. Stir this into the rest of the puree. Stir in the sugar. The resulting mixture should be cool to the touch (or wait until it cools).

Now whip the heavy cream in a mixer until soft, stiff peaks form. Fold in the puree until incorporated.

You've made it this far! Now the fun starts.

Cut the excess round tops of each cake so that both the top and bottoms are straight and not raised. Then cut each cake horizontally into 2 layers. Discard the worst looking layer (that means eat it separately or save it for later). Use the lone layer for between the upper and lower layers of the other cake. This will make a tall 3-layered cake. 4 layers would be too much and might collapse. Remember that the top of the cake will be your bottom. The bottom (where you peeled off the parchment paper from) will be the top of the cake. This is because it is easiest to spread buttercream on that side of the cake.

Take the bottom layer and brush simple syrup, about 1/4 cup on each side of the layer. Place this layer centered on a 9 1/2 - 10" circular cardboard (they can be bought from Michaels). The extra edge can be used as a guide when spreading the frosting. Spread enough strawberry cream on top of the layer to a height of 1/2". Take the middle cake layer, moisten it with simple syrup as you did before and then place it on top of the cream. Press slightly so that the height is even on all sides. Use a spatula to spread the overfilled cream evenly on the side (fill any holes or push in any cream that has come out between the layers). Repeat again, adding cream to the middle layer, moistening the top layer and placing it on top of the cream. The inside of your cake is now assembled. Refrigerate for several hours or overnight to let the gelatin set.

Take the cake out and frost with a thin layer of buttercream. Place back in the refrigerator for at least 1/2 hour to let this layer set. This is called the crumb coat and seals the cake to prevent crumbs from making the frosting impossible to spread. Some of the bavarian cream might mix in on the sides of the cake while spreading this crumb coat. That's ok. It will get covered once you put the final coat of frosting.

Use strawberry halves and piped frosting decorations to finish the cake.

You're done!
Posted by Pumped Up Foodie at 9:17 PM No comments: